Let me just say…WOW. From the minute I picked up this book I was impressed and immediately drawn in. The Story of B, written by Daniel Quinn, is compelling, thought provoking, funny and sad all wrapped up into one book. Written in 1996, Quinn chronicles the journey of a young priest who is sent off by his superior to investigate another priest whom they think in the antichrist. Along this journey, the priest finally finds the man who is now only known as B. Charged with recording and transcribing the ‘antichrist’s lectures’, the young priest begins to not only investigate, but to also follow. Soon enough the priest moves away from his religious background and becomes a disciple of and believer in the secular teachings of B.

Quinn writes the book as an extension of his earlier book Ishmael. Expertly done, Quinn draws from his lessons in Ishmael and fleshes them out with more detail. Throughout the book, the character B references multiple times how some of his inspiration comes from the teachings of his mentor Ishmael. Throughout the novel, B lectures to multiple audiences. His speeches are included verbatim in an 80 page long appendix. Each speech contains golden nuggets of knowledge, mind twisting hypotheticals and anthropological stories.  In fact, Quinn is responsible for the famous boiling frog heuristic that so many us of have learned about to help explain climate change. 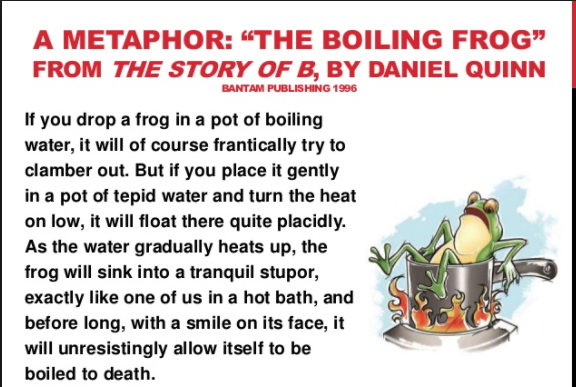 Because there’s simply too much to talk about from this book, I’ve decided to pull out some of my favorites quotes. Some of them I might explain. Others I might just let them marinate in your own brain.

“What works evidently, is cultural diversity. This should not come as a surprise. If culture is viewed as a biological phenomenon, then we should expect to see diversity favored over uniformity. A thousand designs– one for every locale and situation– always works better than one design for all the locales and situations. Birds are more likely to survive in ten thousand nest patterns than in one. Mammals are more likely to survive in ten thousand social patterns than in one. And humans are more likely to survive in ten thousand cultures than in one– as we are in the process of proving right now. We’re in the process of making the world unlivable for ourselves– precisely because everyone is being forced to live a single way. There would be no problem if only one person in ten thousand lived the way we live. The problem appears only as we approach the point where only one person in ten thousand is permitted to live any other way than the way we live. In a world of ten thousand cultures, one culture can be completely mad and destructive, and little harm will be done. In a world of one culture– and that one culture completely mad and destructive– catastrophe is inevitable”

One of which is you.

There’s no one in reach of these words who is incapable (at the very least) of handling them to another and saying, “Here read this.” Parents teach your children. Children, teach your parents. Teachers, teach your pupils. Pupils, teach your teachers.

Vision is the river, and we who have been changed are the flood.

I suppose people will ask you to summarize what it’s all about. I offer you this, knowing how inadequate it is: The world will not be saved by old minds with new programs. If the world is saved, it will be saved by new minds– with no programs”

The contagion has been spread.

Well if those quotes don’t tear your heart out and then breathe life back into you, you might not be human. Or perhaps you’re blind to the realities of our earth. Or perhaps you see clearly whats occurring to our home and don’t care, or don’t feel empowered to do anything.

I’ll admit…I’ve been in each of those positions. I’ve been ignorantly and blissfully blind. I’ve also been awoken and educated full well on the atrocities that are committed everyday and every second on our earth–to your earth.What did I do? Sometimes nothing at all. I continued living, continued consuming, continued polluting. Why? Because I felt powerless, small, futile. Like whatever impact I had, good or bad, just would not matter.

Now though, when I read books like The Story of B, or when I research in my discipline of environmental sociology (or cross disciplines for that matter), I feel deeply. The truth found in the texts, in the words, pulls out of me a yearning to care, to do something– to be apart of the flood.

I am in a unique position in my life where all that is asked of me is to show up. Part of being a Peace Core volunteer is simply to spend time. To live and to be an example. Teaching, classes, projects and behavior change come along the way. Before that though, I simply need to be. To care. If each day I can make one person smile wider, think more critically, respect more deeply–then all goals, objectives, outcomes, outputs and measuring tools aside–I’ve done my job. The trickle has begun. The river is forming. I and others like me are wading in it. The water is rising. The flood is coming.