For Semana Santa, I ran away to Southern Peru to visit la cuidad blanca, Arequipa. During this part of the year the entirety of Peru get days off of work and school. As Peace Corps volunteers, we too are granted a few vacation days to take part in the festivities.  Pretty much any other Latin American and Catholic country takes time to celebrate. They are remembering the persecution and crucifixion of Jesus, and celebrating his resurrection on Easter Sunday. Because of the days off, Semana Santa becomes one of the most traveled times in Peru. Arequipa was full of foreigners and Peruvians from other parts of the country. Turns out, other groups of volunteers had plans to be there also. It was fun getting to meet volunteers from other programs and other departments, as well as reconnect with volunteers from my group that I hadn’t seen in a while.

We ate and drank our way through the city. Before I even got to Arequipa, I was briefed on all the different types of food I needed to try. The first day in town we went to have lunch in the market. I had a recotto relleno (stuffed pepper), pastel de fideos (a cheesy mound of baked spaghetti noodles; like lasagna but without the sauce), and solterito de queso (a old cheese/vegetable medley). All of it was super good and super cheap.  Besides eating in the market, Arequipa offers all kind of different restaurants. You can eat pretty much whatever you want. We also ate dank pizzas from Las Gringas, pasta from Pasta Canteen, crepes from Crepísimo, falafel from Instanbul, and more Ariqupeño food from La Nueva Palomino. Besides offering up great places to eat, Arequipa also has various places to enjoy good beer and cocktails. The local brewery is Chelawasi. They’ve got the best french fries I’ve had in Peru, and some of the best IPAs I’ve had in my life. We visited the Museo de Pisco to try some cocktails, and stopped in at various bars to get a feel for the night life. Brujas was probably my favorite because it was cheap the vibes were good. Casona Forum was cool too because it was like a complex of different bars and night clubs. We found some empty pool tables and I preceded to play the worst 3 games of pool I have ever played in my life.

When we got bored with eating and drinking, we decided to add some structure to our trip and organize some tours. One of which was white water rafting on the Rio Chili. The river comes from the mountains and runs right through the city. For around $30 bucks we were picked up and shuttled out of town. We were outfitted with wetsuits, helmets, life jackets and paddles. My friend Lesia and I were put in a boat with another group of 3 backpackers; 2 were from Spain and the other was from France. We learned the commands for controlling the boat and were sent off down the river. The tour was relatively short, but we still had a really good time. We all managed to stay in the boat despite some close calls. The water was cold but with that much blood and adrenaline pumping, your body stays decently warm. The day after rafting, I scheduled for a guide to take me rock climbing. I brought most of my climbing gear because I knew it would potentially be possible. The first few days in Arequipa I tried to find a partner who had a rope so I could climb for free. But my plan didn’t work out. I ended up going out with a guide named Angel. Coincidently, he took me to the same river valley I went to for rafting. In fact, boats could be seen and the screams could be heard from where we were climbing. It was cool to be in and see the same space but to use it differently. The climbing routes there are short but technical. The rock is volcanic and reminiscent of limestone. It was a little slippery and had a lot of pockets. I got up about half the routes before I started getting my butt kicked on harder routes. By the time we were done it was dark and my arms were entirely pumped. I remember feeling satisfied and happy that I spent some extra money to go climbing. I think it’s really rad that climbing has become a passion of mine. One that is available all over the world and always in beautiful places. 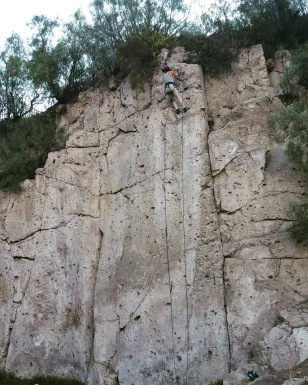 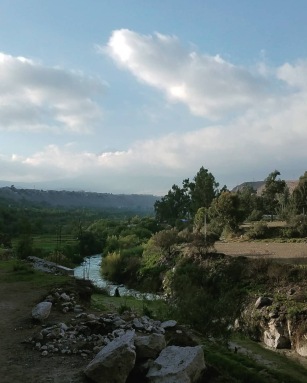